Christmas holiday time = two weeks of time at home = rest and cleaning up
The previous sums up the importance of these two weeks of home time, as much as having dinner with family and friends, time to take care of my home during the 12 days of Christmas is an important part of my yearly activities.
While sorting out the hot press I found a bag with two Sasha dolls bought in the early 1980ies for my daughter Jasmin. 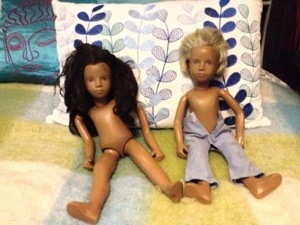 What are Sasha dolls?

Sasha dolls are a type and series of doll created by Swiss artist and dollmaker Sasha Morgenthaler (1893–1975), produced in Germany and the United Kingdom beginning in the late 1960s. Popular with collectors, Sasha dolls are characterized by their individualism, their realistic expressions, their unique color, and the extreme attention to detail in the manufacture of the dolls as well as their clothes.
Excerpt from Wikipedia
As production of these dolls have ceased in Germany and England they are now collectibles and I am joining their ranks with my two English made dolls, a girl with dark brown hair and a boy with blond hair, Gregor.

The first thing I noticed when taking the dolls out if their hiding place is the matted hair. On advice of Jasmin who played with the dolls as a child, I could try washing them with normal shampoo and then apply a hair conditioner. I did just that and the dried it with gently brush strokes to untangle it and shape it. This worked beautifully and Sasha looks much happier, although she still needs her arms to be re-stringed.